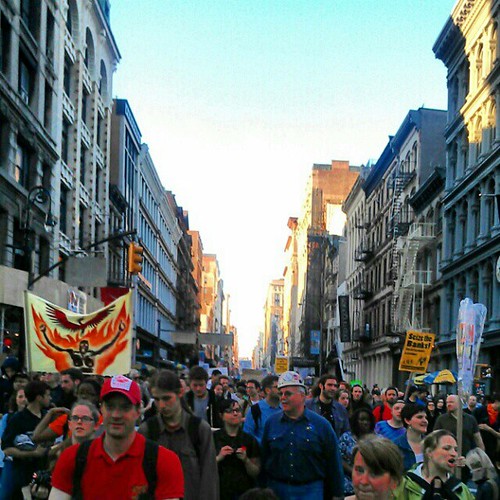 Protesters march in the May Day parade down Broadway

A police officer who worked during the May Day protests gives some advice to the Occupy movement.

Yesterday’s May Day activity required a huge police response, and one of those officers took to Reddit’s politics section to provide some pointers on how the movement could get past its current perception:

I’ve had that opportunity to speak with dozens of protesters this past year from Occupy and similar movements. I’ve also spoken with many more store owners, residents and people working in the area. I keep hearing these two things from the public:

1. I agree with the protesters but they are acting juvenile.
2. What specifically do they want?

The officer also brainstorms some policies that the Occupy movement could endorse to make it more popular with the public, such as calling for a maximum interest rate on student loans and legalizing marijuana.

Head over to the discussion thread on Reddit to read the rest of his thoughts, then take a look through the comments for the Reddit community’s reactions to the issues the officer raises.

In June 2020, Citi Bike riders took an average of 63,819 rides per day, with each bike making about four trips per day