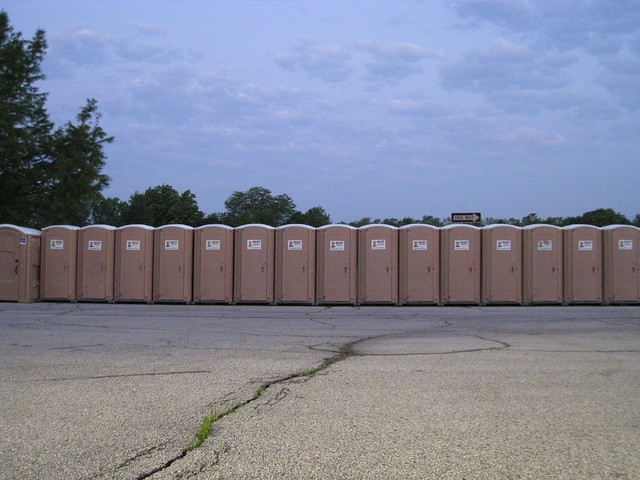 Congressman Jerrold Nadler, Assembly Speaker Sheldon Silver, State Senator Daniel Squadron, and Councilwoman Margaret Chin announced today that Occupy Wall Street was able to secure an off-site location at which to store three portable bathrooms which will be available to the protesters 24 hours a day. This follows a meeting by Community Board 1 in which the local residents expressed concern over the growing sanitary and quality of life issues that the park was causing.

The three port-a-potties will be accessed via a loading dock at 52 Broadway (the headquarters of the United Federation of Teachers) and will have a security guard on site around the clock.

The official statement is included below:

“We are pleased that, on the heels of the City responding to our calls to remove excessive barricades, there has been significant progress on one of the other pressing quality-of-life issues: improved bathroom access.

“OWS states that it has secured access to a loading dock area connected to 52 Broadway and has obtained three portable bathrooms to install there, with a trained security guard 24-hours-a-day. We appreciate their attention to this issue.

“We reiterate our call on the City to take a ‘zero-tolerance’ approach to public urination and other such behavior, and to enforce laws prohibiting excessive noise.

“The fact that both the City and OWS are making progress in addressing serious quality-of-life issues signals that there is a path for solving these and other emerging concerns. We strongly encourage the parties to continue to communicate and we ask that the park remain open and accessible for emergency personnel.

“As we have said before, these concerns must be solved but cannot be used as a pretext for the violation of First Amendment rights.”

Staten Island ferries make over 40,000 trips per year, from 118 trips each weekday to 96 trips per day on Sundays