The cabins of the Titanic and a modern ship, the Marina (via NYTimes / Josh Cochran)

When the Titanic set sail from London towards New York City, it was the largest vessel in the world and bigger than anything that had gone before as well as being the last word in comfort and luxury, but the Titanic’s turn-of-the-century luxury would likely be unthinkable to most passengers on the massive cruise ships of today.

The New York Times posted a great graphic that compares the various amenities of the Titanic to modern vessels, which shows how bedroom size and entertainment options that have changed over the past 100 years. In 1912, the style was shared bathrooms and separate spaces for men and women to relax, but the ships of today have high-tech movie theaters and waterslides to entertain passengers.

In addition to the graphic, be sure to read the accompanying article to find out more what a trip aboard the Titanic was like, check out the front page story when the Titanic sank, and watch the New York Times Titanic page for updates as we approach the 100th anniversary of the disaster.

Two giant ships, then and now: The Titanic docked in Southampton in 1912 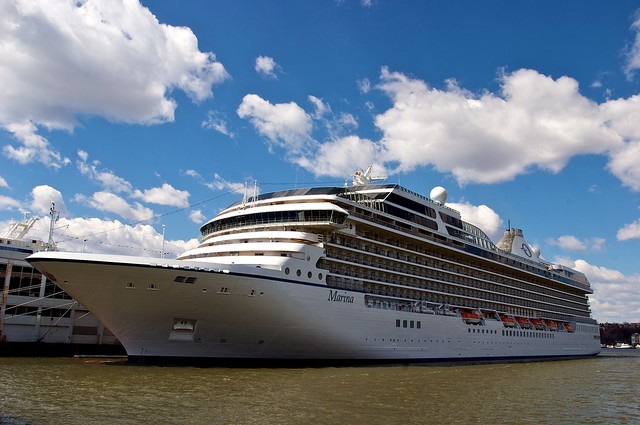 Marina by Oceanic Cruises docked at Pier 90 in NYC