Giants win the Super Bowl via @davetisch on Twitter

Now that the Giants have won the Super Bowl, it’s time to start planning that victory parade!

The parade will begin at Battery Place and Washington Street at 11:00 AM and continue northbound up the Canyon of Heroes to Worth Street. The parade will be followed by a ceremony at City Hall Plaza, at which the Mayor will present the NY Giants with Keys to the City.

You can even win some VIP tickets to the parade!

The City will conduct a public giveaway for 250 winners (500 tickets) to the ceremony in City Hall Plaza on Monday, February 6th from 9:00 AM to 11:00 AM through www.nyc.gov and 311. People will also be able to access the entry form through the New York City Mayor’s Office Twitter page. Tri-state area residents 18 years and over will have an opportunity to enter the giveaway by visiting www.nyc.gov or calling 311 and selecting the Ticket Giveaway menu option. There will not be an opportunity to enter the giveaway before 9:00 AM, and it will end promptly at 11:00 AM.

Check out a preview of what the parade will look like – this was the Yankees ticker-tape parade in 2009: 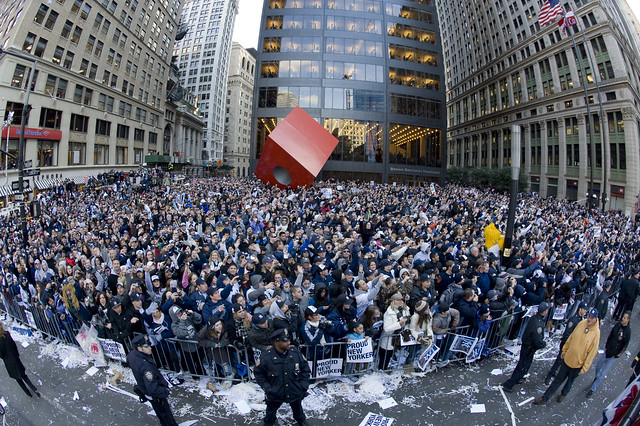 Where does all that confetti come from? It’s about 2,000lbs of shredded paper that is distributed to buildings along the parade route! Learn more about the parade preparations from Downtown Alliance Vice President Joe Timpone – known as the Confetti King:

Roosevelt Island was named "Welfare Island" in 1921 after the Penitentiary Hospital located on the Island. It was renamed in honor of Franklin D. Roosevelt in 1977