The complete text of the letter from Brookfield’s CEO Richard B. Clark is included below:

As you know, for over three weeks, Zuccotti Park (the “Park”) has been used by “Occupy Wall Street” and other protesters as their home base. The Park is owned by a Brookfield affiliate and was recently renovated at Brookfield’s considerable expense as an amenity for the general public. It is intended to be a relaxing tree-filled oasis in the midst of the hustle and bustle of Lower Manhattan. We fully support the rights of free speech and assembly, but the manner in which the protesters are occupying the Park violates the law, violates the rules of the Park, deprives the community of its rights of quiet enjoyment to the Park, and creates health and public safety issues that need to be addressed immediately.

Within the Park, the protesters have set up living spaces with tarpaulins, mattresses, sleeping bags, tables, bookshelves, gasoline-powered generators and other items that are inconsistent with the rules and normal public use of the Park. At all hours of the day and night, protesters are sleeping on benches and walkways, blocking normal pedestrian access to the general public and preventing cleaning and maintenance workers from performing necessary upkeep. When not blocked by protesters, the walkways throughout the Park are blocked by the various items and equipment brought to the Park by the protesters.

We are extremely concerned about dangers posed by damage that may have been incurred within the Park and by materials and equipment brought into the Park by the protesters. Brookfield protocol and practice is to clean the Park on a daily basis, power-washing it each weeknight, and to perform necessary inspection, maintenance and repairs on a regular, as-needed basis. Since the occupation began, we have not been able to perform basic cleaning and maintenance activity, let alone perform more invasive repairs. For example, if the lenses to the underground lighting have become cracked, water could infiltrate the electrical system, putting the occupants of the Park at risk of an electrical hazard or causing short-circuiting which would result in repairs requiring the Park to be torn apart for re-wiring. Any such repairs would force the Park to be closed to the public for indeterminate periods of time, depriving the City of a vital green space. Moreover, we are concerned about the fire safety hazard that gasoline and the gas-fired generators pose to the Park’s occupants.

After weeks of occupation, conditions at the Park have deteriorated to unsanitary and unsafe levels. The Park has no toilets and while the existing trash receptacles have always been more than adequate to accommodate normal waste in the Park, those receptacles are no longer even close to sufficient and the resulting trash accumulation is attracting rodents.

Additionally, we have received hundreds of phone calls and e-mails from concerned citizens and office workers in the neighborhood. Complaints range from outrage over numerous laws being broken including but not limited to lewdness, groping, drinking and drug use, to the lack of safe access to and usage of the Park, to ongoing noise at all hours, to unsanitary conditions and to offensive odors. We have received complaints of harassment, one woman stating that she was verbally abused in front of her 5-year-old child and complaining that she had a package stolen from her as she tried to cross the Park.

We are also concerned with the constant deliveries of materials to the Park. Delivery vehicles have now been appearing on a daily basis with packages of all shapes and sizes for the Park’s occupants. None of these deliveries are being screened by our security team or the police for suspicious or harmful materials. The Park’s location in the financial district makes this activity particularly concerning.

For all of these reasons, we cannot currently ensure that the Park is safe nor can we perform the necessary cleaning, inspections, damage assessment and repairs. In light of this and the ongoing trespassing of the protesters, we are again requesting the assistance of the New York City Police Department to help clear the Park so that we can undertake this work at the earliest possible time. We will defer to the Department’s judgment on how beset to accomplish this, but the Department’s intervention is necessary both to ensure our ability to comply with our obligations as owners and to make the Park safe for the neighborhood and public.

Once we have completed our cleanup and maintenance, we would ask that the Department assist Brookfield on an ongoing basis to ensure the safety of all those using and enjoying the Park.

As you know, we have discussed this situation with you and/or others under your command on a daily basis seeking assistance. The situation continues to worsen and we need your assistance to ensure public safety.

I appreciate your time and consideration in addressing this important and pressing matter. Please call me at (212) 417-7063 with any questions or if you wish to discuss our request further.

Not long after the protesters moved into Zuccotti Park, representatives from Brookfield walked through the park and handed out notices of the park rules:

Zuccotti Park is a privately-owned space that is designed and intended for use and enjoyment by the general public for passive recreation.

For the safety and enjoyment of everyone, the following types of behavior are prohibited in Zuccotti Park:

Camping and/or the erection of tents or other structures.

The placement of tarps or sleeping bags or other covering on the property.

Storage or placement of personal property on the ground, benches, sitting areas or walkways which unreasonably interferes with the use of such areas by others.

The use of bicycles, skateboards and roller blades.

Removal of objects from trash receptacles.

The threat of having to move out of Zuccotti Park while it is cleaned has caused Occupy Wall Street to mount an effort to clean the park themselves, asking for mops, cleaning supplies, power washers, and trash bags. The cleanup started spreading on Twitter with the hashtag #wallstcleanup and now has a Facebook Event page, which is being used to coordinate donations of cleaning supplies and sets Thursday after General Assembly as the time the protesters will disassemble the park for cleaning.

Currently, the Facebook Event page seems to indicate that, after they have cleaned the park themselves, the protesters will resist any attempt by the NYPD to move in to Zuccotti:

“Then, Friday morning, we’ll awake and position ourselves with our brooms and mops in a human chain around the park, linked at the arms. If NYPD attempts to enter, we’ll peacefully/non-violently stand our ground and those who are willing will get arrested.” – Operation #wallstcleanup on Facebook 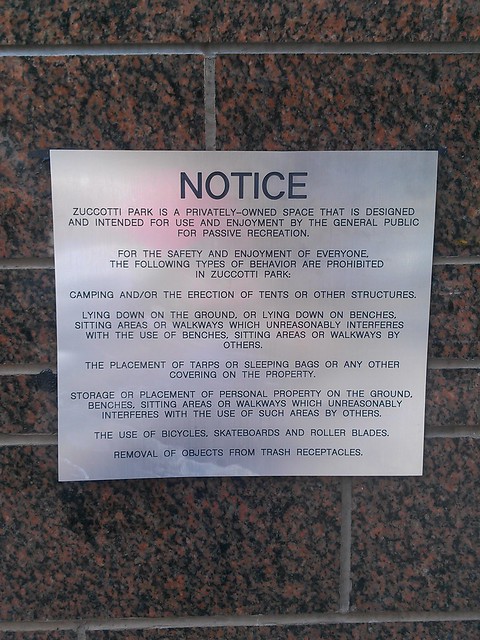 Zuccotti Park rules as posted in the park area itself

Protesters Are Told They’ll Have to Leave Zuccotti Park Temporarily

Central Park's Great Lawn was originally a reservoir of fresh water for the city's water supply system. In 1931, it was filled in with material excavated from Rockefeller Center and the Eighth Avenue subway