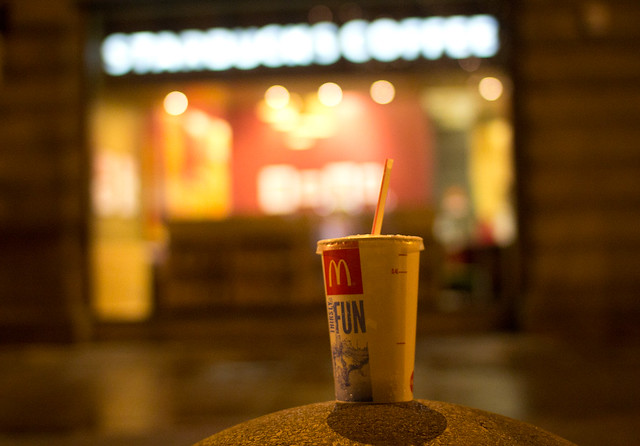 While Mayor Bloomberg tries to find support for his restrictions on sugary soda sizes, the authors of the very study he references say that he misunderstood their work and a ban would do more harm than good.

You may remember when talk of Mayor Bloomberg’s soda ban began, he spoke about a study where people ate from a constantly-refilling soup bowl. The results of the study were that people ate an average of 73 percent more soup, compared to a bowl that wasn’t secretly refilling. It’s a compelling story and elicits a somewhat comical mental image of people chained to a table being forced to eat never-ending soup, but the problem, according to the authors of the study, is that it can’t be compared to the soda ban the way Mayor Bloomberg wishes it could.

In The Atlantic’s Health section, Brian Wansink and David Just of Cornell University write about some of the ways in which the soda ban isn’t necessarily the correct response to studies about how people overconsume foods.

There’s a critical difference between the lab and Lexington Avenue that the Mayor’s office didn’t account for: when Joe the Plumber and Bob the Banker buy soft drinks, they buy the size they want. They aren’t randomly forced to take a 44-ouncer when they really wanted a 12-ouncer. Moreover, their Coke or Pepsi doesn’t magically refill itself. If that happened, they’d overdrink.

The soup bowl may have had a refill tube feeding it from the bottom, but the people in the study didn’t consciously choose a large bowl of soup. The comparison breaks down because people who consume large sugary sodas intentionally buy large sugary sodas.

Wansink and Just explain that their studies show people eat or drink “substantially more” when given larger portions, but the nuance lies in the perception of the people in the study: They didn’t choose larger sizes, they were simply presented with them, and within the confines of the experiment, were unlikely to even notice the difference in sizes. For thirsty New Yorkers, the choice of a large soda is a conscious and deliberate one.

Given that Bloomberg’s soda ban would restrict choice, the outcome could be negative, causing people to splurge and eat more at other meals.

Learn more about the issues that a soda ban could raise in the Atlantic article, read about Wansink’s never-ending soup study, and learn more about serving size and overconsumption in Wansink’s paper ‘Can Package Size Accelerate Usage Volume’