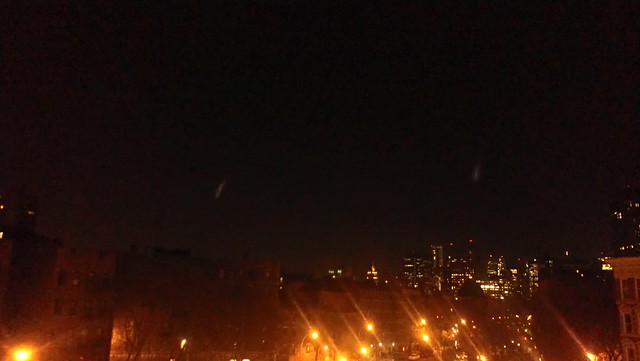 After being repeatedly delayed for over a week due to weather, NASA’s ATREX rocket launch finally took place early on Tuesday morning!

The rockets launched from Wallops Island, Virginia at 4:58am, which was at the very end of the overnight launch window. The five rockets were aimed 50 to 90 miles up at the high-altitude jet stream, and they released a chemical trail that was visible from the ground and would allow scientists to study the movements of the jet stream.

During the test, four of the chemical trails were visible from Manhattan in the southern sky, where they appeared bright white and slowly dispersed and faded away over the course of 20 minutes. In the photo above, two of the chemical trails are seen, right after they were released and were glowing brightly. This photo from Columbia, MD shows the pattern that the rockets made as they released the trimethyl aluminum, which glows white when exposed to oxygen:

Watch the video below for an explanation of the launch, and visit the ATREX article on gun8 for more explanation and links.

There is a birth in New York City every 4.4 minutes