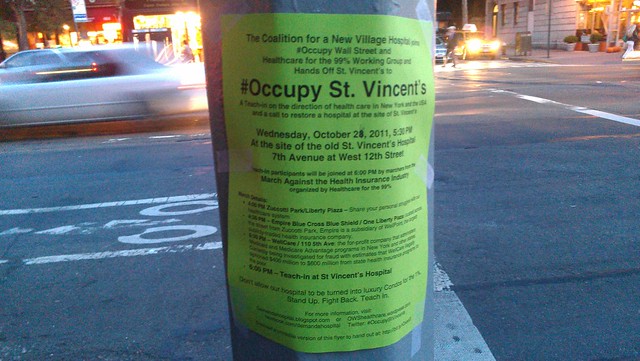 On Wednesday, October 26th, various groups focused on healthcare and health insurance issues will join with Occupy Wall Street for a series of demonstrations and teach-ins under the name “Occupy St. Vincent’s”. The group is named after the former hospital in the West Village, which was famous for its service during 9/11 and its controversial closing, which left the West Village area without an urgent care facility.

The full text of the flyer is printed below:

The Coalition for a New Village Hospital joins
#Occupy Wall Street and
Healthcare for the 99% Working Group and
Hands Off St. Vincent’s to

A Teach-in on the direction of health care in New York and the USA and a call to restore a hospital at the site of St. Vincent’s

Teach-in participants will be joined at 6:00 PM by marchers from the March Against the Health Insurance Industry organized by Healthcare for the 99%

Don’t allow our hospital to be turned into luxury Condos for the 1%
Stand Up. Fight Back. Teach In.