Occupy groups gathering after 7am via @allisonkilkenny on Twitter

NYPD checking IDs at Wall and Broadway via @patrickdehahn on Twitter

NYPD at Pine and William via @johnknefel on Twitter

First arrest - for blocking Broadway via @mariejoelle on Twitter

Protesters gathered across from Zuccotti via @dennistrainorjr on Twitter

The protesters amass at Nassau and Pine via @ChristRobbins on Twitter

Police and barricades on Pine Street via @shannonpareil on Twitter

Occupy spent the weekend planning and celebrating, but September 17th is the big day – the one year anniversary of Occupy Wall Street.

A Great Big City was there last September 17th as hundreds gathered in Bowling Green for the first day of the movement (photo below) and has covered Occupy Wall Street for the past year.

If you live or work in Lower Manhattan, be aware that there may be checkpoints and secured areas in advance of any Occupy actions.

Stay tuned throughout the morning for photos and info as Occupy attempts to shut down the Wall Street area.

Occupy’s plans are to meet at pre-determined intersections around the Wall Street area, and they have divided their actions into four different zones downtown. Here’s an image from @austingst on Twitter that explains the plan: 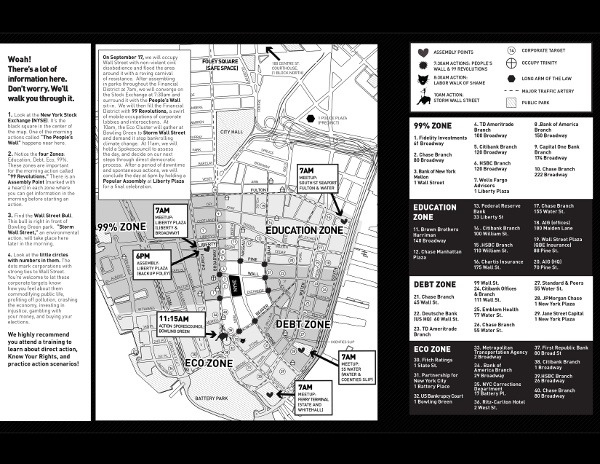 Other planned events on s17nyc.org are anarchist related, including a 2pm march from downtown to the Upper East Side:

The following events are autonomous and unpermitted.

8 AM: NYC anarchists and radicals! Bring your black flags, banners, bandana’s and boots and gather at Zuccotti Park to form a black bloc then march to Wall Street in solidarity with Occupy Wall Street. (We will ask OWS to be reasonable with the time so this action may be scheduled for a later time)

12PM: Meet at Zuccotti Park for an Open Assembly so we can begin to organize future autonomous events. We encourage a large anarchist presence. Bring fliers to promote individual events.

Note: Demonstrations, assemblies, events, etc. that are formed during this assembly are not Occupy-related unless clearly stated.

2PM: After the Open Assembly we will prepare for a massive (unpermitted) autonomous march from Zuccotti Park to Bloomberg’s mansion on 79th street.

Just before 8am, the first arrests began taking place, as clergy members and Occupy supporters sat down at Broadway and Wall Street and refused to move. Approximately eight people were quickly removed and arrested as the NYPD announced over megaphones that anyone blocking pedestrian traffic was subject to arrest.

The four Occupy zones that mobilized across the Financial District mostly resulted in groups standing on sidewalks, with the large police presence making an occasional arrest. Rough estimates are that, as of 8:30am, 25 arrests have been made.

The sea scorpion was declared the New York state fossil in 1984, in reference to the first known specimen being found in Oneida County, NY in 1818