On Their Third Birthday, Occupy Wall Street Moves Towards a New Occupation 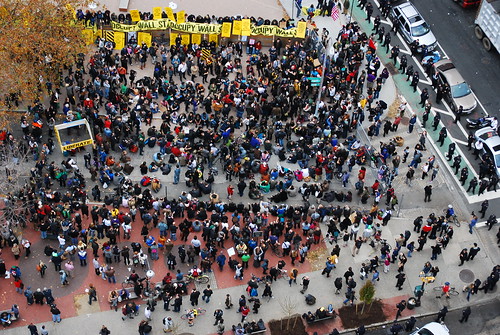 Duarte Square from above via Time Schreier on Flickr

Occupy Wall Street has been on the run since being evicted from their previous home in Zuccotti Park, but today, on the three-month anniversary of the movement, the group plans to re-occupy a new space in Hudson Square.

The location that the protesters have their eye on is the open space next to Duarte Park at Sixth Avenue and Canal Street, near the entrance to the Holland Tunnel, which previously held an art installation called LentSpace. This area is owned by Trinity Real Estate, the business division of Trinity Church, one of the largest landowners in NYC. The church has expressly prohibited Occupy Wall Street from using the vacant space as “to do so would be wrong, unsafe, unhealthy and potentially injurious [to an Occupy Wall Street encampment].”

Trinity supports the vigorous engagement of the issues Occupy Wall Street has raised. However, we do not condone breaking the law. We will continue to extend our hospitality to protesters and all who come to our church properties during open hours. We strive to be responsive and responsible and appreciate the many expressions of support we have received.

December 17th will mark the third month of Occupy Wall Street, and their first whole month without a space to call their own. To celebrate, the group has planned a re-occupation event called #D17, where they will gather at noon and attempt to claim the Trinity Church-owned LentSpace as their new encampment.

The previous OWS camp at Zuccotti was unique in that it took place in a privately owned public space, which allowed the camp to exist in a fairly untested gray area where the NYPD was not able to enforce the park’s laws or evict the group without the prior request of the owner, Brookfield Properties. The Trinity-owned LentSpace near Duarte Park, however, is not one of the special POPS parks, so the protesters can expect action against them if they attempt to occupy.

As a response to the ban on megaphones or amplified PA systems without a permit, OWS has a new technique planned for today’s demonstration: using the Unsilent Night technique of bringing radios to the space and tuning them all to WBAI 99.5FM, which will be broadcasting special OWS programming from noon to 6pm.

Special musical guests will also be playing in WBAI’s studio. Here is an unofficial list of performers via @dontbeaputz on Twitter:

[Update] – After gathering in Duarte Square at noon, the protesters marched around the LentSpace area, produced two wooden staircases, and climbed over the chain-link fence that was surrounding the space. After 10-20 minutes, the police moved in to the fenced-in area and began arresting the protesters even as some were climbing back over and under the fence. There was also confrontation when the protesters pushed inwards on the fence, bending the support beams and causing the police within the space to push back outwards on the fence to keep it upright. The AP reports that about 50 arrests were made.

We are saddened that OWS protestors chose to ignore yesterday’s messages from Archbishop Tutu, from the Presiding Bishop of the Episcopal Church, Katharine Jefferts Schori, and from Bishop of New York Mark S. Sisk. Bishop Tutu said: “In a country where all people can vote and Trinity’s door to dialogue is open, it is not necessary to forcibly break into property.” The Presiding Bishop said: “Other facilities of Trinity continue to be open to support the Occupy movement, for which I give great thanks. It is regrettable that Occupy members feel it is necessary to provoke potential legal and police action by attempting to trespass on other parish property…I would urge all concerned to stand down and seek justice in ways that do not further alienate potential allies.” Bishop Sisk said: “The movement should not be used to justify breaking the law nor is it necessary to break into property for the movement to continue.”

OWS protestors call out for social and economic justice; Trinity has been supporting these goals for more than 300 years. The protestors say they want to improve housing and economic development; Trinity is actively engaged in such efforts in the poorest neighborhoods in New York City and indeed around the world. We do not, however, believe that erecting a tent city at Duarte Square enhances their mission or ours. The vacant lot has no facilities to sustain a winter encampment. In good conscience and faith, we strongly believe to do so would be wrong, unsafe, unhealthy, and potentially injurious. We will continue to provide places of refuge and the responsible use of our facilities in the Wall Street area. We are gratified by the support we have received from so many in the community.