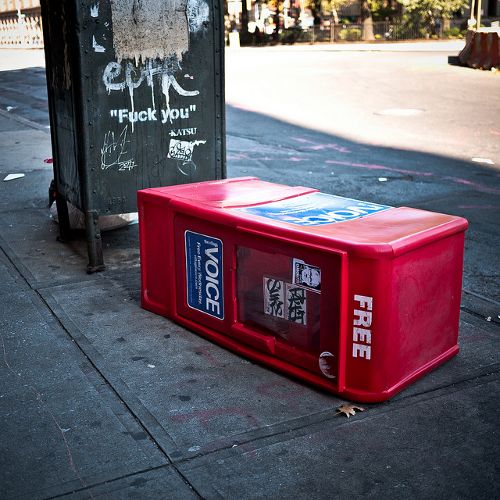 The Village Voice announced today that the paper has been sold to Voice Media Group, as part of a conglomerate of thirteen “alternative weekly” publications. The Voice was already joined together with these papers as part of an earlier sale to Village Voice Media Group, but this newest repackaging has removed one troublesome member from the group: The controversial classifieds site Backpage.com.

Have the tough years come to an end? The Voice had fallen from its former glory as the go-to alternative paper in New York as it transferred ownership to journalists in Phoenix, AZ and became part of a larger, more profitable business. Once an outlet for hard-hitting investigative journalism and publisher of well-known writers, the printed paper has survived while the company also seemed to successfully embrace online journalism, but the paper has been jettisoning journalists from its sinking ship in an effort to either downsize or consolidate to a standard set of national reporters and editors contributing to all thirteen local papers.

And then, there was Backpage.

Backpage is simply a Craigslist competitor, but its Adult Entertainment section grew to overwhelm the site’s public perception when it involved promoting child prostitution and human trafficking. These are surely things that advertisers in the “legitimate” aspects of the paper would not want their brands associated with, and this most current restructuring into Voice Media Group distances the alt weeklies from Backpage, since the classifieds site will stay behind as a part of Village Voice Media Group.

What do you think? Is this a chance for the Voice to revive its bohemian roots or is this the further corporatization of a company that is “Village Voice” in name only? Leave a note in the comments with your thoughts!