Violet The Red-Tailed Hawk of Washington Square Park Has Died 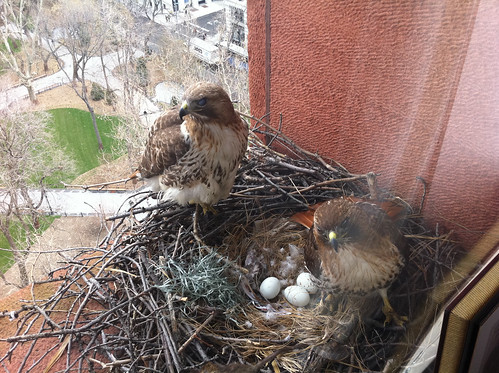 Violet and Bobby await the birth of Pip via NYU Sustainability

Violet the red-tailed hawk, who came to the public’s attention this summer as she and her mate raised a chick high above Washington Square Park, has died, according to DNAinfo.

On Thursday, Violet underwent surgery to mend a previous injury to her foot, and although the first indication was that she was doing well, she later died, possibly from a heart attack.

The pair of hawks became local legends after they nested on the 12th floor of Bobst Library at NYU and a webcam was set up so that viewers from around the world could watch as Violet and Bobby cared for their nest and waited for their eggs to hatch. One chick was born, named Pip, and the public watched as Pip grew and took flight from the nest.

Sadly, a previous update to the NYTimes City Room Hawk Cam Page shows how, even as early as May 2011, Violet’s injured foot was becoming an issue that needed addressing:

Update, May 11 | A red-tailed hawk hatchling emerged May 6 in the nest of Violet and Bobby, high above Washington Square Park. But Violet has a badly injured leg that is imperiling her life. Rehabilitators will be at N.Y.U. on Thursday to capture her, treat her and, hopefully, return her immediately to the nest.