The bright light of a helicopter hovering over Brooklyn

A helicopter hovering high above Brooklyn and visible from Manhattan caused a late-night stir among residents in the Prospect Park area.

[Update June 8th] – Helicopter identified! Read more at the bottom of this page.

What you see in the photo above isn’t particularly compelling, but it shows how tonight’s high-altitude helicopter was the brightest thing in the sky. The helicopter, seen in the middle between two clouds, was hovering high above south Brooklyn for hours tonight, and had residents taking to Twitter and two different Brooklynian.com forum threads.

When AGBC observed the helicopter from Manhattan, it was in the same location and altitude as it appeared on June 2nd, when we first tried to track down the mystery.

Tonight, the noise went on for hours until the helicopter finally moved out and headed toward New Jersey at 11:30pm.

Choire Sicha ‏from The Awl poked some fun at Mayor Bloomberg, who was the recent target of helicopter complaints on the Upper East Side.

Why has Mike Bloomberg’s helicopter (just assuming it’s him) been hovering over downtown Brooklyn for the last hour.


New Yorkers get used to a certain amount of air traffic over the city, but this helicopter is significant due to the amount of time it hovers over one location where nothing newsworthy seems to be going on and no police activity is taking place below. The helicopter also hovers extremely high compared to the day-to-day news and police helicopters that fly over the city, and stays completely stationary, almost appearing as a star if it weren’t for its blinking indicator lights.

On the Brooklynian thread, one poster says that the helicopter may be getting aerial footage of the Barclays Center.

Do you have any additional info or theories? Leave them in the comments below!

Some clever sleuthing by two Twitter users gives some insight into what the helicopter was up to over Brooklyn. 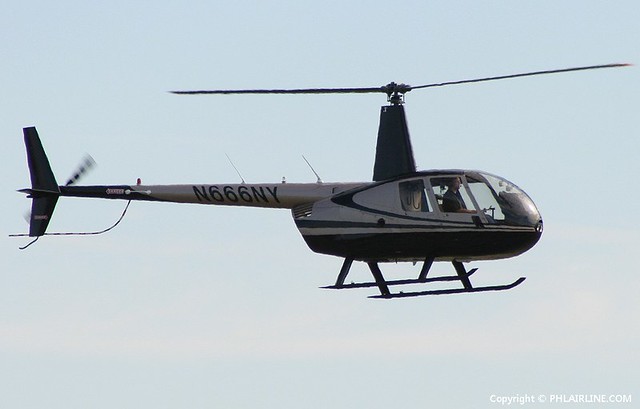 N666NY, the helicopter hovering high above via PHLAirline.com on Flickr

Using the information on when the helicopter was seen in the air, Twitter user Jason Rabinowitz was able to use LaGuardia airport flight history to identify the culprit: Aircraft N666NY, hovering at 5,600ft over Atlantic Ave and Flatbush Ave.


Taking that tail-number information, Twitter user streebs dug up the company name of Sky River Helicopters and found out they were doing a traffic study to get a baseline measurement of traffic conditions before the opening of the Barclays Center.

.<a href="https://twitter.com/yankees368">yankees368</a> .agreatbigcity Mystery solved. Tracked the reg back to Sky River Helo’s in NJ. They were doing a DOT traffic study last night


Some impressive detective work on the part of Jason and streebs!