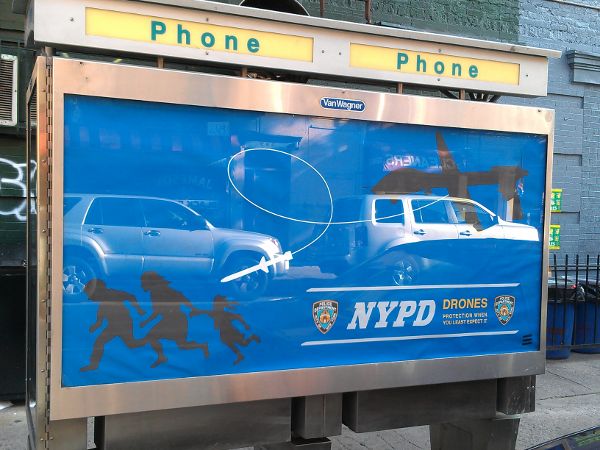 Today’s Occupy protest had quite a few people taking a look at some suspicious advertisements on payphone kiosks in the Financial District. Ads for “NYPD Drones” and some very 1984-looking surveillance artwork had Twitter users debating whether the NYPD was off their rocker and advertising themselves as a police state.

The ads are, of course, fake and both Salon and Gothamist posted today’s photos with an explanation, but the ads are nothing new – the street artist has been working around the city since at least the beginning of the summer.

Above is some “NYPD Drone” street art that was seen on East 21st Street back in July. The fake ad may have caused less commotion than the ones in the Financial District, but this earlier ad’s placement is significant, since it is less than a block away from the NYPD police academy on East 20th.

Have you seen any of the fake NYPD ads around the city? Send in your photos!