The Blue Angels Conduct a Test Flight Over The Hudson River 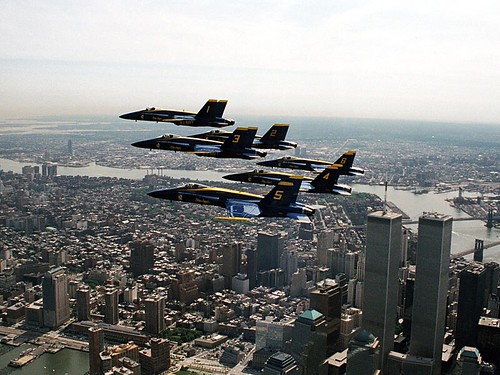 Previously: The Blue Angels flying over Manhattan and the Twin Towers (uploaded by davidm2 on Flickr)

[Update] – Read more about Fleet Week 2012, which will bring sailing ships, warships, and the Blue Angels to NYC.

Still feeling tired from the weekend? How about a low-altitude fighter jet flyover to wake you up?

The Blue Angels will be in town on Monday to survey the area above the Hudson River, where they will be performing a full demonstration during Fleet Week New York 2012. Two F/A-18 jets will fly “as low as 500 feet and at speeds up to 345 mph” and conduct multiple passes over the Hudson River between 9:30am and 11am, turning around near the Verrazano and George Washington bridges.

The Blue Angels aerial survey will include two F/A-18 jets conducting passes as low as 500 feet and at speeds up to 345 mph. The aircraft will depart Republic Airfield and conduct multiple passes over the Hudson River between 9:30-11:00 A.M., then turning in the area south of the Verrazano-Narrows Bridge and north of the George Washington Bridge. They will then depart south to return to their home base in Pensacola, Florida. Pilots will visually inspect the airspace to ensure the six-jet demonstration team can safely maneuver during the Fleet Week New York flyovers.

Take a look west toward the Hudson this afternoon to catch a glimpse of the planes, and stay tuned for photos and video of the flyover to be posted later today!

[Update – 12pm] Video from the flyover

It was a frigid, windy day on the ground, but the flyover carried on without any trouble. The two planes flew in formation, going north up the Hudson, then flying a second pass going south and looping toward the Verrazano Bridge. Both passes were relatively slow, but this was simply a scouting mission, as the pilots determined whether the path over the Hudson River would be appropriate for the full Blue Angels show during this year’s Fleet Week.