Summer heat is settling in ☀️

Weather for the week ahead:
Rain today through Monday, with high temperatures peaking at 98°F on Sunday.
Now that summer has arrived, so have warnings about high UV exposure: Now is the time to start protecting your skin and eyes from ultraviolet radiation, which will be higher during the summer months. Look for a skin protectant that is labeled as "broad spectrum" and at least SPF 50 and wear sunglasses with both UVA and UVB protection.

Thanks for listening to A Great Big City. Follow along 24 hours a day on social media @agreatbigcity or email contact@agreatbigcity.com with any news, feedback, or topic suggestions. Subscribe to AGBC News wherever you listen to podcasts: iTunes, Google Play, or Overcast, RadioPublic, Player FM, or listen to each episode on the podcast pages at agreatbigcity.com/podcast. If you enjoy the show, subscribe and leave a review wherever you're listening and visit our podcast site to see show notes and extra links for each episode. 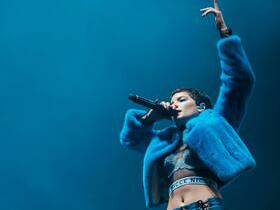 Halsey with Blackbear and CHVRCHES